It’s that time of the week! Each Tuesday the team at Reelgood picks out a few of our most anticipated movie and TV shows coming to streaming. Hopefully, this list will help you figure out what to stream this week, from HBO Max’s King Richard to Netflix’s live action Cowboy Bebop.

The Wheel of Time

Rosamund Pike stars in The Wheel of Time, an upcoming fantasy series based on Robert Jordan’s famous novels. Pike plays Moiraine, a magic wielding member of the Aes Sedai organization. Moiraine is in search of a prophet referred to as the Dragon. Throughout her hunt she enlists the help of five individuals, all of who have the potential to become the Dragon, and ultimately wield the fate of the world. Watch the first season of The Wheel of Time on Amazon Prime Video this Friday, November 19th.

King Richard tells the story of Venus and Serena Williams’ father, Richard (Will Smith). The biopic examines the relationship between Richard Williams and his daughters, his coaching style, and how Venus and Serena became two of the biggest names in tennis. Watch King Richard on HBOMax this Friday, November 19th.

Netflix’s hit glassblowing reality competition is back with a special Christmas edition. Five returning artist will compete in the infamous hot shop, but only one will take home the winner’s Christmas cash. Watch what has been dubbed the “extreme sport of the art world” on Blown Away: Christmas, which hits Netflix this Friday, November 19th.

The Curse of Von Dutch: A Brand to Die For

1998’s Cowboy Bebop is considered by many to be one of, if not the most iconic anime of all time. From the dazzling visuals and spectacular sci-fi setting to the cool characters and smooth jazz-y soundtrack, it’s a triumph of genre blending. Later this week, Netflix is scheduled to release a live action adaptation of the famed anime. Fans will once again be able to bounce from bounty to bounty with Spike Speigel, Faye Valentine and more. Watch Cowboy Bebop (2021) on Netflix this Friday, November 19th. 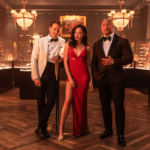