After weeks of teasing, Ariana Grande finally premiered the music video for “Thank U, Next,” and, yes, the anticipation was worth it. In five minutes, Grande parodies four teen romcoms with help from a host of guest stars. And just to add to the perfection, she poked fun at her recent relationship and break-up with Saturday Night Live star Pete Davidson. The entire video is flawless, but more than anything else, it will leave you ready to rewatch Mean Girls and the rest of the iconic films the singer pays homage to.

Before diving into the films, let’s take time to offer Grande major props for all of the cameos. The video includes scene-stealing moments from Legally Blonde‘s Jennifer Coolidge, Mean Girls‘ Jonathan Bennett, and Keeping Up with the Kardashians‘ Kris Jenner. Seriously, this is one music video that’s overflowing with pop culture references. Because you know you want to watch it again, check out the video below, and find out where you can stream every movie referenced in Grande’s “Thank U, Next” music video.

Lohan’s Cady Heron earns her spot at the table with the Plastics in this early ’00s teen comedy, but it’s McAdams’ Regina George that steals the show. It’s only fitting then that Grande takes on the role of Regina in her video, while Dynasty actress (and Lindsay look-alike) Elizabeth Gillies takes on the role of Cady.

The ultimate cheerleader movie is a timeless classic, and a no-brainer for Grande to honor in her look back at some of the ’00s greatest teen movies. The video includes a mini-cheer competition and a recreation of the movie’s adorable teeth-brushing scene.

Like it’s hard for Grande to channel her inner Elle Woods? The singer has more than a little in common with Witherspoon’s character, who takes full advantage of the fact that people will underestimate her talent and moxie because she has a deep devotion to the color pink.

Grande gives up her classic ponytail in order to better embody Garner’s Jenna. And even though it’s not as famous as the other films mentioned, it makes perfect sense that 13 Going on 30 is included. The film’s theme of a young girl being given a glimpse into her future in order to get things right romantically, definitely seems to apply to the “God Is a Woman” singer’s current feelings on love.

Bonus: Keeping Up with the Kardashians (Hulu)

OK, so there’s no recreation of any actual KUWTK drama, but if you want more of Jenner being the ultimate momager, then this is where you’ll find her.

Go ahead and say thank you (next) to Grande, because she planned the perfect movie night for you. 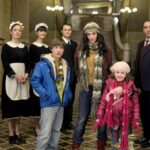