It’s that time of the week! Each Tuesday the team at Reelgood picks out a few of our most anticipated movie and TV shows coming to streaming. Hopefully, this list will help you figure out what to stream this week, from Netflix’s Lost in Space Season 3 to The Power of the Dog.

Lost in Space follows the Robinson family after they crash land on a remote alien planet. The hit Netflix show will debut its third and final season later this week. Molly Parker, Toby Stephens and Maxwell Jenkins star in the Emmy nominated series, which was lauded for its impressive special effects. Watch the beginning of the end on Netflix this Wednesday, December 1st, when Lost in Space Season 3 premiers.

The Power of the Dog

Critically acclaimed director Jane Campion’s upcoming film is also headed to Netflix later this week. The Power of the Dog features an all-star cast and is based on Thomas Savage’s 1967 novel of the same name. Benedict Cumberbatch, Kirsten Dunst and Jesse Plemons are few of the bigger names attached to this sprawling western that has potential to be an awards contender. Watch The Power of the Dog when it heads to Netflix on December 1st.

Christmas isn’t just for kids, right? Seth Rogen stars as Santa Claus himself in the upcoming adult animation, Santa Inc. The comedy series also features big name comedians Sarah Silverman and Craig Robinson. Get into the holiday spirit with Santa Inc. on December 2nd 2021, when all 8 episodes drop on HBOMax.

Harlem is an Amazon original series starring Megan Good, Jerrie Johnson, Grace Byers and Shoniqua Shandai. The show will follow the group of friends as they navigate their own lives, in addition to the new relationships found in New York City. Watch Harlem when it hits Amazon Prime Video on December 3rd, 2021. 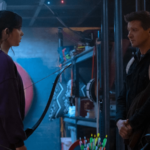 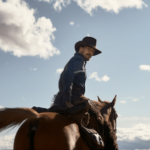